Our friend and former inhabitant of Berlin, Sami Lababedi just dropped this new video. You should give it a watch.

Paris based brand Quotamine just put out their first-ever video “Didier”. It is a mixed bag by design showing extraordinary talent with Victor Campillo & Ibu Sanyang, mixed together with friends and teammates like Pierre Subra, Vincent Boyom and owner Luidgi Gaydu.

All in all a great video! Make sure you watch it in full!

At first when I started the Giddy series I wanted every one of them to have a different theme but in the end, I think they all end up looking almost similar to one another, same style of music same vibe.

Romain Batard is back with one of the most interesting video series in skateboarding. And ever since he delivered that quote in our interview with him he has been steadily delivering Giddy’s with a stronger sense of concept and individuality.

Steve Malet kills it in number 8! He is one of Paris’ most exciting skaters out there right now even though he is not even originally from France. But Steve is only one reason and this Giddy truly delivers from the skating, the editing, the song choice and the special effects. It is a good rounded out piece of work!

The “Paving Space” sculpture set is made by the French Raphaël Zarka, who also really wanted his pieces to be used with skateboards. Lucky enough there were enough willing skaters coming from Paris to try out the very interesting shapes of the objects standing in BPS22 Charleroi, Belgium.

People who know me are probably aware of the fact that visiting Paris for the first time last year changed quite a lot for me. Besides my growing excitement for the French language, music and architecture, I furthermore figured out that there is also a kind of French way to skate. So Romain Batard also became one of my favorite film makers and since Giddy #1 was already filled with tons of good footage, I knew what to expect for #2 right before I hit the play button.

Augustin Giovannoni back at it again with a new clip. Featuring some good skating by Pierre Subra, Franz Grimm, Joffrey Morel, Yoan Taillandier and more. What a great looking city Paris is.

A group of about six guys showed up whenever we met to go and skate around the city and each one had a “down for whatever” face. Although we were strangers to them, they trusted us from the very beginning. We quickly forgot about the language barrier. It felt like we didn’t even have to speak a language, and if we did, we definitely spoke the same one. We felt more than welcomed the whole time. I kept on wondering who might have started spreading the rumours that French people can be assholes…well, except for that one time outside of a bar when a very charming young lady asked for a cigarette and everyone started screaming at her for fun like she just won the Champions League finals. Our time in Paris was really about the flow of cruising; meeting up, having coffee and finding the adventure right in front of us. Things are just going to happen if you wait long enough and we had time to spare. Meet a new generation of young Parisian skateboarders: 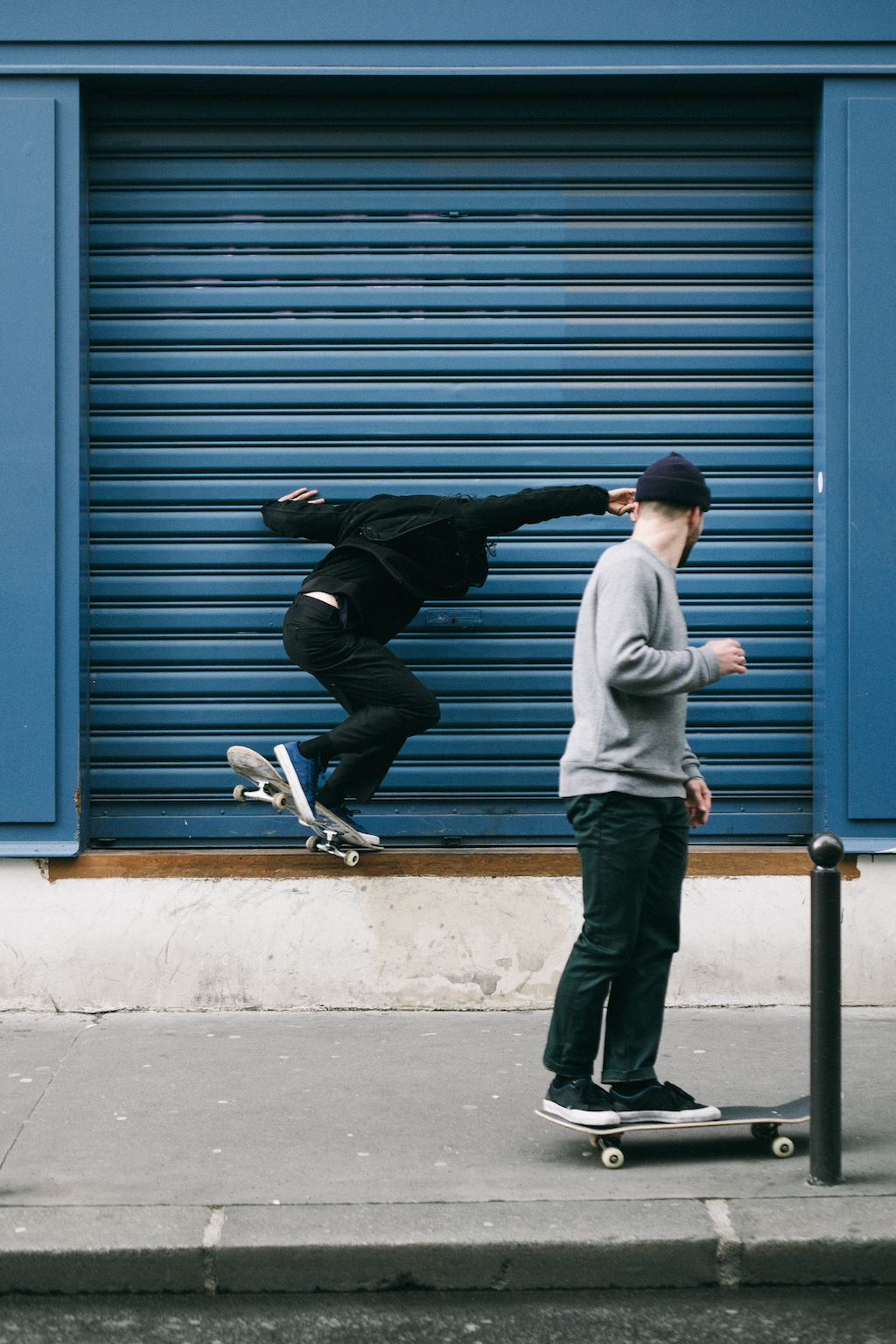 The French people have a well-known love for their own language and talking in general. Speaking French is like driving a red 70’s Mercedes-Benz 280 SL Cabriolet into the sunset while on the way to the ocean…at least for German people. Our neighbours are aware of their beautiful language, and confidence was always helpful in most situations. As we took the Metro every now and then, we noticed something very different about how they announce the upcoming stop. The first announcement is much more kindly than the second one. They say it sounds more aggressive to people that are from out of town or people who had a second glass of champagne. It makes you feel like you’ve fucked up in a way, and even reminds you of situations in your childhood like, for example, when your mom told you to immediately step off the see-saw. It’s an interesting form of communication, and I kept on thinking about the moment they recorded the two different emphases of the very same word. Wonderful! 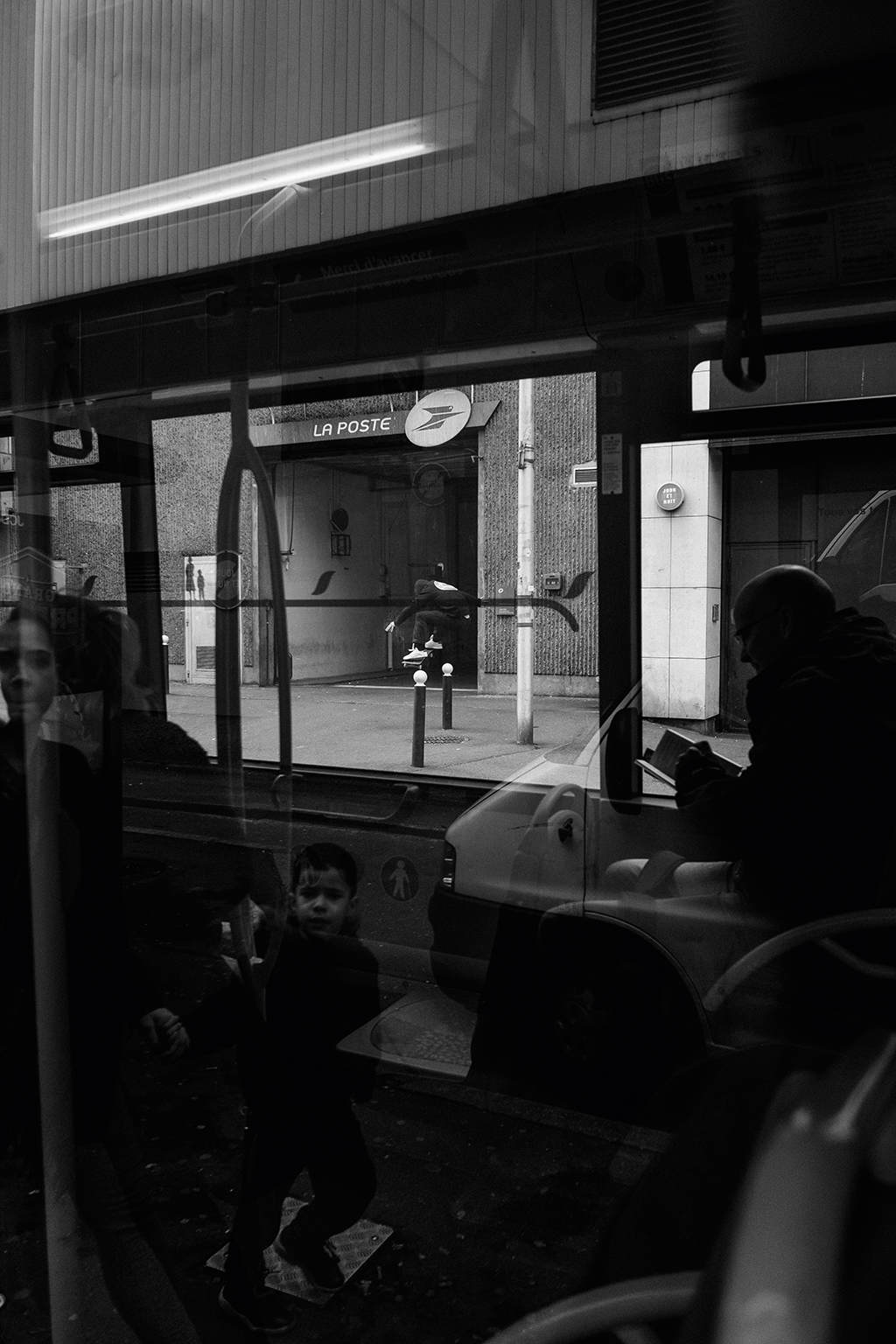 The Best Pavement in the World.

Look at the way the French people skate. A lot of them use their body language way more often than others do. They can express themselves in a unique way. This probably comes from their self-assurance. While others try to be someone else, the people we have met are just themselves, but also very special. Pierre Subra, Edouard Depaz, Santiago Sasson, Joseph Biais, Franz and Clement Bossard were just a few of the guys we got to go skating with. They say the city has the best pavement in the world and they’re right, at least if you compare it to the rather rough pavement in Berlin. I guess there are a few cities in the world which could actually claim that title too, but none of them might be as beautiful and vast as the French capital. One can practically skate from A to B doing tricks and going fast. There are a lot of concrete pavements and those are definitely the best. So, if you happen to meet a crew during your next stay in Paris, make sure to skate a lot. They cruise their way through the Arrondissements and stop whenever, wherever for whatever reason – just for the fun of it. If skateboarding had only one single crucial element, it would probably be good pavement. 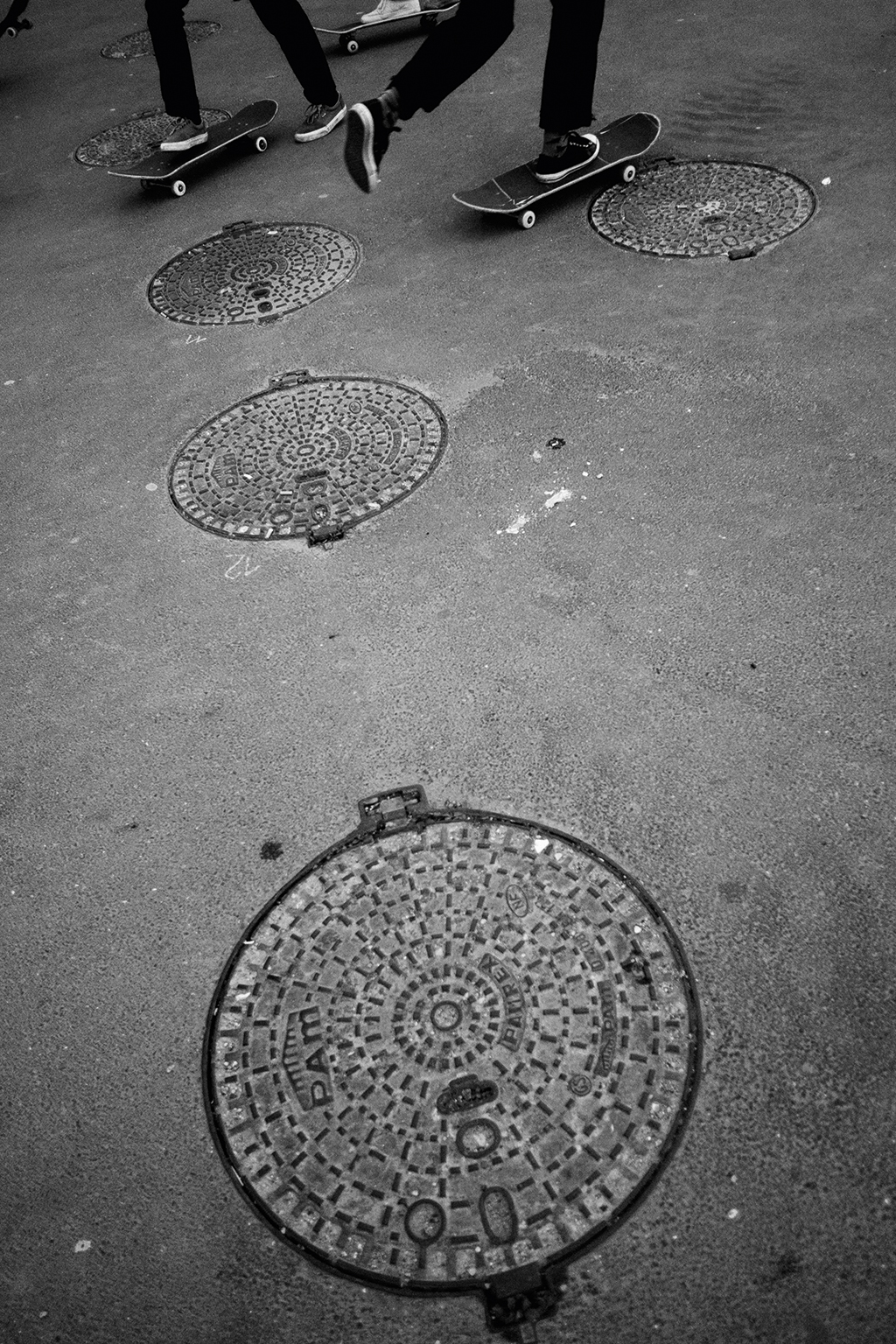 Mood is absolutely everything. One single person can influence a whole crew of people, in good or bad directions. We felt weightless while hanging with the Parisians. After only a day it felt like we had known each other for a lot longer than just a couple hours. While in other cities you might get a cold shoulder, there are some very good people in this city with the ability to create the harmony we loved to experience. It is almost like the city gives an extra portion of strength, a smile, and on the other hand, exhaustion when you finally call it a day.
Well, it is more like the city itself calls it a day for you, and it can call you out! 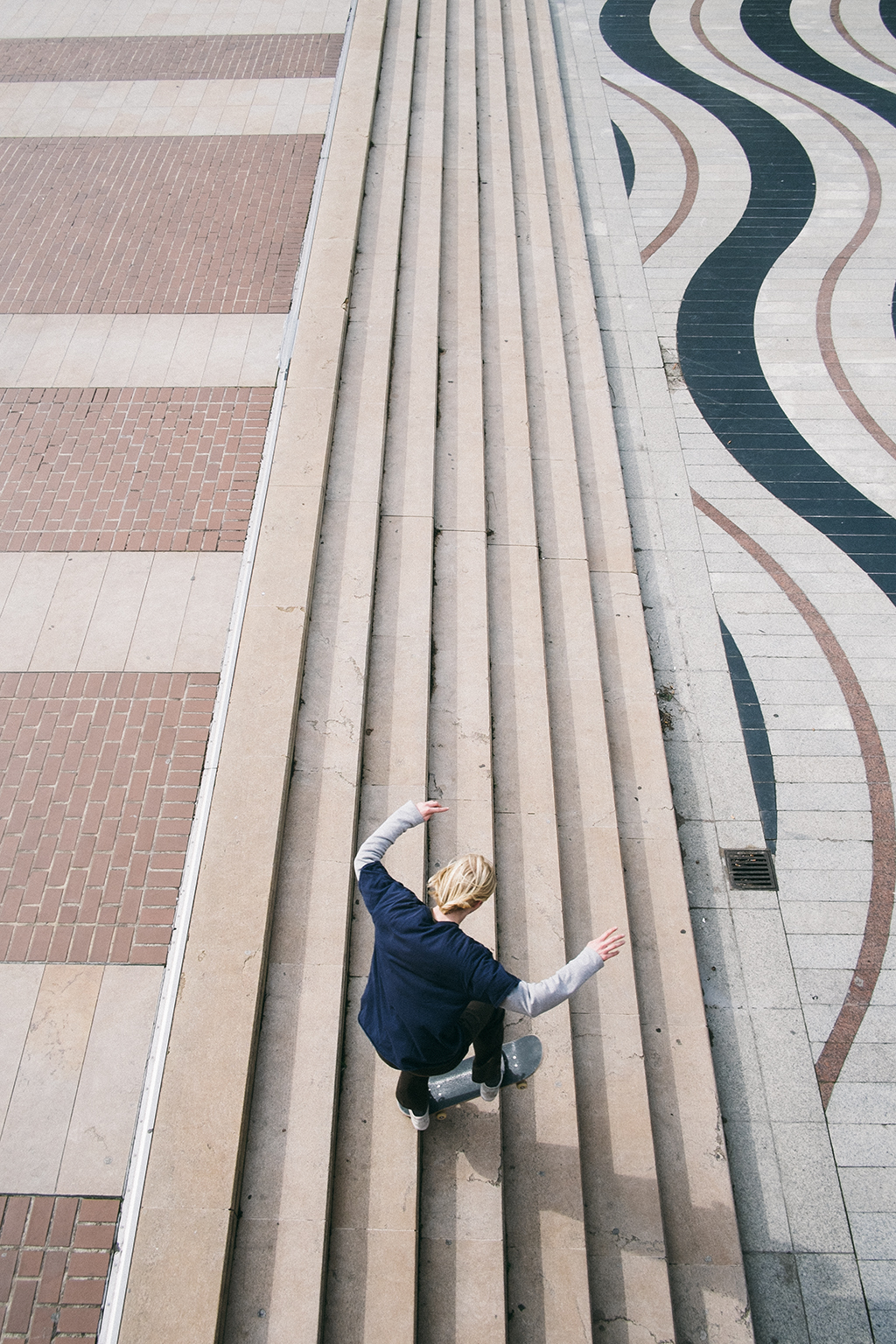 There is no such thing as time. It is either bright outside or dark. It is either dry streets or soaking wet ones. As time went by while preparing for the day in our AirBNB apartment, (located in the third Arrondissements) we noticed that the people did actually wait for each other and every single person to show up, but waiting is definitely the wrong word for it. They had a special mentality about time management. If someone was late it felt like it didn’t really matter. Meanwhile, the crew was waiting but they weren’t sitting around doing nothing. Instead, they were either skating or occupying themselves with activities. With that calmness, it seemed as if there was nothing they were actually waiting for. This is probably the best way to not waste time and definitely healthier too. Your heart will thank you when you’re old. 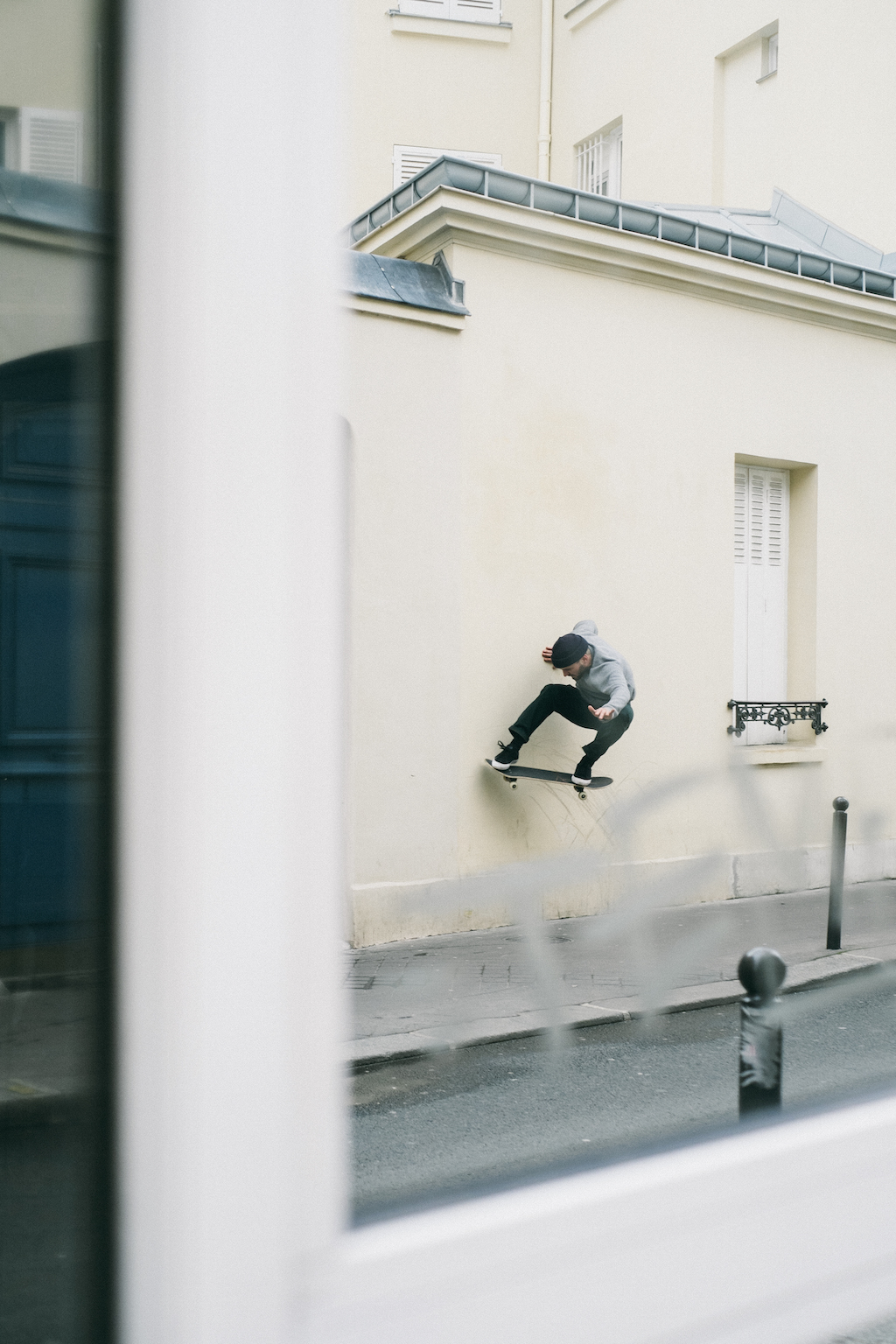 Isn’t it fantastic that we wake up, take a shower, get some breakfast and then can decide to dress up in a way we never have before? Tomorrow we can wear pink pants while yesterday we wore a suit. There are no rules for anybody at any time and don’t ever let anyone tell you differently. There are a lot of people who actually complain about fashion a lot. In Paris, there are probably people who feel the same though we didn’t find them during our stay. But there are people who are trying to set up rules for fashion… These people are afraid of otherness, afraid of losing control, and afraid of the new. This is weak! Do it your own way and make sure to feel comfortable before you leave the house because that is what people notice. Parisians feel comfortable with what they do and they have a certain charisma that we can learn from. We really wish that all of you guys could, just once, experience your own time in the wonderful city called Paris. We want to thank all the people we met in Paris very much and all the people that helped us during our stay. Have you seen Midnight in Paris yet? You’ll love Paris in the rain so go for a walk. “Walking by the Seine at midnight, Gil bumps into Gabrielle and, after it starts to rain, he offers to walk her home and they learn that they share the love of Paris in the rain.” 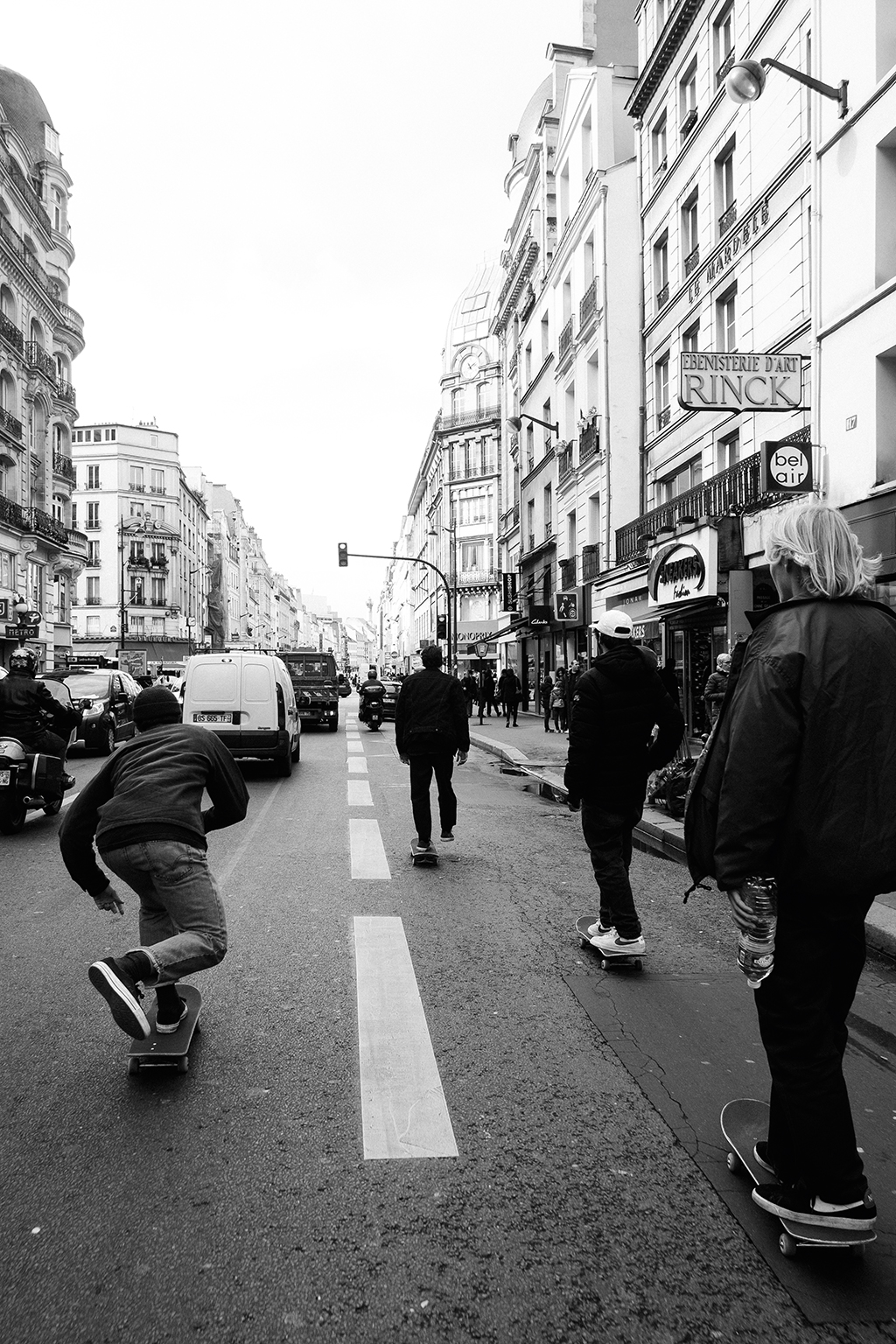